Tryst with the Rubik’s Cube 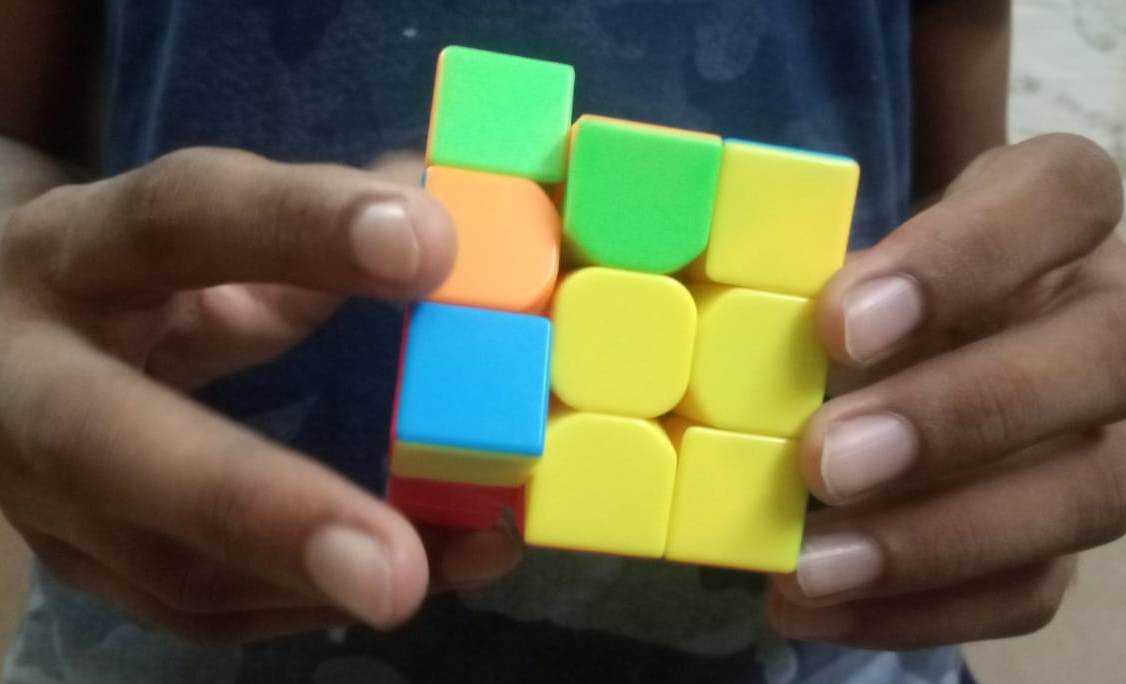 For a common man, it is just a six-colored, impregnable, annoying object, which is often noted lying unimportantly in the background. But the object has intrigued many others including mathematicians. The object is known as the Rubik’s cube. It finds application in mathematics too. For instance, it has been proved that if you reassemble a dismantled cube, the probability that the cube will be in a solvable state is 1/12. Mathematics can also explain away the reason for parity in big cubes. Yet the cube has proved to be a really hard piece of work for mathematicians. There are several mathematical problems based on it, yet to be solved!

The history of Rubik’s cube starts in 1970 when American Larry Nichols created the first 2×2 cube in which the blocks were held together by magnets. In 1974 Erno Rubik invented the 3×3 magic cube which is currently more popularly known as Rubik’s puzzle. Rubik invented his first model of the Rubik’s cube at the age of 29 using wood, paper and clips. Nearly after a month, he deduced a way to solve it.

The cube was officially released in the year 1977. It gained recognition by the early 1980s and became famous worldwide. Larry Nichols later received his patent. Very few people could solve the cube intuitively but slowly solution books were published. As the internet grew, anyone could learn how to solve the Rubik’s cube. Slowly other types of Rubik’s puzzles got introduced like the 2×2, pyraminx, 4×4 (Rubik’s Revenge), 5×5 (Professor’s cube), etc. Though they were not invented by Rubik they were still called Rubik puzzles.

The World Cube Association (WCA) was formed in the year 2004 by Ron Van Bruchem and Tyson Mao. It is a non-profit association There are 17 official WCA events: 2x2x2, 3x3x3, 4x4x4, 5x5x5, 6x6x6, 7x7x7, 3x3x3 blindfolded, 4x4x4 blindfolded, 5x5x5 blindfolded, 3x3x3 fewest moves challenge, 3x3x3 one-handed, megaminx, pyraminx, square 1, skewb, 3x3x3 multi-blind and clock. Square-1 is the only official shape-shifter puzzle recognized by WCA . Foot solving was recently removed as an official event. There are even unofficial puzzles like windmill, ghost cube, pyramorphix, dogic, gear cubes, 8×8, 9×9, 10×10, etc. One of the misconceptions of blind-folded solving is that the solver keeps track of all the pieces while solving. But actually, the solver memorizes the initial positions of the pieces and solves it by using a single algorithm and uses it multiple times according to the position of the pieces. Rubik’s cube world championships are held every two years. The last one was held in 2019 in Melbourne, Australia.

The two main methods in speedcubing are Fridrich and Roux. Fridrich is considered better than Roux in speedsolving for it is wholly algorithm based which means you don’t need to think much while solving. But roux which is less algorithm based is most suitable for one-handed solving, as one-handed solving gives more time for thinking, further Roux takes lesser moves than Fridrich and gives more freedom to move the pieces. It also has a lesser number of cube rotations, which makes it easier for one-handed solving. Another method called ZZ is ideal for the fewest moves challenge (FMC). Using ZZ involves certain steps initially, making it easier to continue with intermediate steps in Fridrich and reduces the move count. Normally there would be 1211 cases in the last layer when solved by Fridrich, but ZZ narrows this down to 496. Therefore one can solve the whole last layer by learning 496 algorithms (this is a special set of 1 look-last layer algorithms called ZBLL).

There are several sets of algorithms like VHLS, BLE, HLS, COLL, etc. Each of these has its advantages for example if you use VHLS and COLL, you would get easier cases in the final step or even skip it.

The least number of moves required to solve any scramble in the 3×3 without a defined method was found to be 20. This number is known as god’s number. Kociemba’s algorithm and a scramble pattern called ‘superflip’ played a significant role in locating this number. The god’s number for the 2×2 cube is 11. It is not yet estimated for bigger cubes as it is exceptionally complex. The devil’s algorithm is an algorithm that solves a cube from any scrambled state. It uses the concept of Hamiltonian circuits.

The quality of the cubes has improved as lubricates and magnetic cubes got introduced. There are many brands for speedcubes. Gan is widely accepted as the best speedcube because of its good speed, corner-cutting and size. Pop-ups are common in big cubes. In such a situation, the pieces have to be put back before stopping the timer.

Max Park is the most well-known speedcuber as he holds 5×5, 6×6, 7×7 and one-handed 3x3x3 single world record and 4×4, 5×5, 6×6, 7×7 average world record with a huge dominance. Sebastian Weyer holds a 4x4x4 single world record, Yusheng Du for 3x3x3 single and Felix Zemdegs for 3x3x3 average. Most of the top cubers including Max Park and Felix Zemdegs use the Fridrich method. Kian Mansour and Blake Thompson are some speedcubers who use a roux. Stanley Chapel is the best in 3×3, 4×4, 5×5 blindfolded.

Solving the cube is not as hard as a non-cuber might think. All it requires is patience and determination. The beginner method has only 3 algorithms which makes it easy to memorize. To learn the Fridrich method and become a speedcuber one has to learn 78 algorithms, which may also seem impossible but could be easily mastered within a week or two.

There are several other things to achieve in this field other than becoming the world’s fastest cuber. For instance, you could create a better method to solve the cube or discover god’s number for other puzzles and even beat the record 33×33 to design the world’s biggest cube!